The Maltese House of Representatives consists of 65 MP’s, elected for five years. There are thirteen electoral districts in Malta, electing five MP’s each. The electoral system is Single Transferable Vote (STV). Under STV, every voter ranks her or his candidate preferences. When indicating their preferences voters may choose as many candidates as they wish from different political parties. However, in actual practice Maltese voters usually choose voters from a single party. In order to win a seat, a candidate must reach a specified “quota” of votes in the district. This quota is determined by taking the number of valid votes and dividing them by the number of seats plus one. 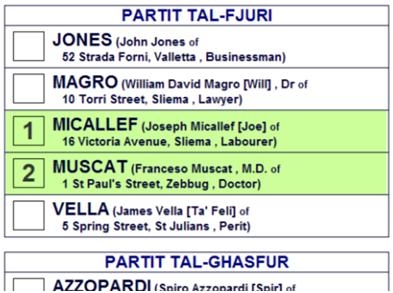 When the ballots are first counted, the first preferences on all ballots are examined, and any candidate who received enough first preference votes to meet the quota is elected. It often happens that some candidates have more first preference votes than the quota actually required for election. In that case, all votes which a candidate received in excess of the needed quota are declared surplus votes. But these votes are not disregarded; instead they are transferred to the candidate who was indicated on the ballot as the voter’s next-ranked choice. Once these votes have been transferred, a second count will be made to determine whether any other candidate has achieved the quota. Additional counts will usually be necessary to determine the various winners in succession. If on any count no candidate meets the quota, the candidate with the fewest number of votes is eliminated and his or her votes are transferred to the candidate who is the next-ranked choice on the ballot paper. (If a ballot paper no longer indicates a preference for a remaining candidate, then the vote becomes ‘non-transferable’ and remains unused.) This process continues through successive counts until all seats have been filled.
The STV system facilitates voting for individual candidates rather than closed party lists, minimizes the number of “wasted” votes and achieves approximate proportional representation. However, a mismatch between the percentage of first preference votes a party gets and its corresponding number of elected MP’s is not rare in Malta, having occurred four times since 1981. In order to deal with this problem, two constitutional amendments have been made aiming at restoring proportionality in cases when the party with the largest number of votes does not get the largest number of MP’s. In these cases, more seats are added and the legislature naturally consists of more than 65 seats, as is the case with the last legislative election of March 2013, which resulted in a 69-seat House of Representatives.