Elections at the national level

The legislative body in Luxembourg is the Chamber of Deputies, which has 60 seats. Elections are held every five years and the electoral system is proportional, using the Hagenbach-Bischoff method. Under this method the electoral quota for each of the 4 electoral districts is calculated by dividing the total number of valid votes by the number of seats to be allocated, plus one. Voters choose candidates through preferential voting and are allowed to choose candidates from different party lists. The initial number of mandates allocated to a party list is derived by dividing the votes for each list by the electoral quota. Remaining seats are allocated using the largest average method, also known as the D’Hondt rule. Naturally, the seats are distributed within party lists to the candidates with the largest vote totals.

Elections for the European Parliament

Each voter has six votes and can choose candidates from different party lists or cast all of his/her votes to one party list. If a voter wishes to vote for an entire party list, they just fill a white circle at the top of the list. 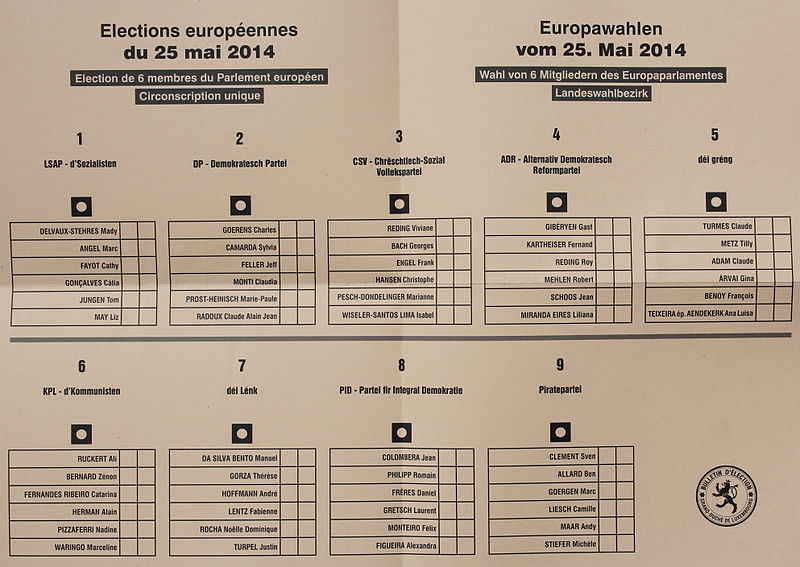 Sample ballot from the 2014 European Elections in Luxembourg.
Source:
http://upload.wikimedia.org/wikipedia/commons/b/bf/Ballot_paper_European_Parliament_elections_2014_in_Luxembourg.JPG